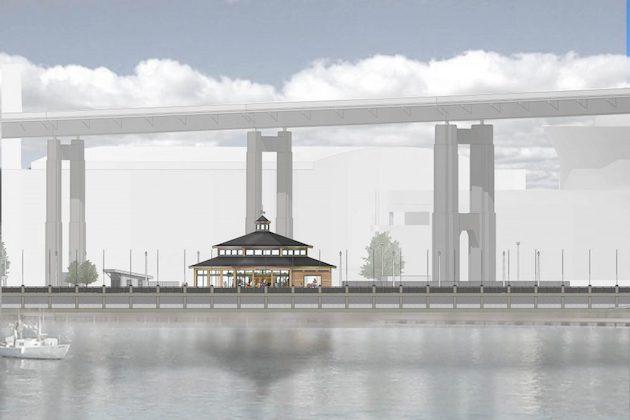 The project will consist of a new building near the corner of Prime and Perry streets to house the nearly century-old De Angelis Carousel.

"The Carousel project celebrates both Buffalo's industrial history and our ongoing work to revive Buffalo's Waterfront," Cuomo said Friday. "With the community's support, New York will continue to invest in projects like this that are transforming the city's burgeoning waterfront into a central hub for residents and visitors alike to enjoy for generations to come."

"Today we celebrate the incredible journey of the De Angelis Carousel, and its new home at Canalside," Lieutenant Governor Kathy Hochul added. "The carousel that was built right here in Western New York will soon be returning home nearly a century later and will be enjoyed by children for generations to come. It's part of the continuing transformation of Buffalo's waterfront that is drawing praise from visitors and publications from around the world. The Buffalo Heritage Carousel will be a star attraction on our waterfront - a key part of future growth and the emerging Canalside neighborhood."

The vintage menagerie, park-style carousel was manufactured in 1924 by Spillman Engineering in North Tonawanda for Dominick De Angelis. The carousel was in operation until the 1950s at which point it was stored by the De Angelis family until Buffalo Heritage Carousel acquired it in 2016 with the support of the Margaret L. Wendt Foundation with a goal of providing family-oriented recreation on Buffalo's waterfront and to celebrate Western New York's industrial heritage.

"The carousel will be unveiled next summer, adding to Canalside's colorful history. This project is part of Governor Cuomo's overall vision for activating Buffalo's waterfront and will complement the recently opened Explore & More Children's Museum and the Longshed project, which will be completed next year," ECHDC Chairman Robert Gioia said Friday.

Governor Cuomo awarded a $1.2 million matching grant to begin the project. KeyBank and the First Niagara Foundation matched Governor Cuomo's $1.2 million grant. The Margaret L. Wendt Foundation provided a grant of $250,000 to purchase the carousel, Assemblyman Sean Ryan secured a grant of $600,000 for the carousel restoration, Senator Chris Jacobs secured a grant of $500,000 for the building and the Buffalo and Erie County Greenway Commission awarded $200,000 for capital expenses. The Russell J. Salvatore Foundation, Wegmans and West Herr have also been donors to the Carousel project.

"We are excited that construction of the carousel's new home is starting this fall so that our authentically restored wood park menagerie carousel can make its much-anticipated debut in the summer of 2020. This rare and historic Spillman carousel will be powered by the sun, demonstrating the use of renewable energy and will be the newest family recreational and educational destination at Canalside. This classic attraction offers a gathering place for the community and for families to share memorable moments as well as bolstering Buffalo Heritage Tourism," Board President of Buffalo Heritage Carousel, Inc. Laurie Hauer-LaDuca said Friday.

NYPA chairman and Buffalo resident John R. Koelmel added, "The significant NYPA support toward this project is a demonstration of the Power Authority's commitment to be a good neighbor in Western New York. The restored carousel will be a wonderful attraction for local residents and tourists alike."

The carousel project will complement the $5.53 million Longshed building project under construction on the northern end of the Central Wharf at Canalside. The wood-frame structure will reflect the Central Wharf site's history by incorporating elements from the Joy and Webster Storehouse located on the site in the early 1800s. The approximately 4,400-square-foot Longshed will include a main floor, which stretches the length of the building; a small mezzanine level; public bathrooms; storefront-type entry doors; and second-floor windows with an exterior porch that overlooks the Canalside lawn. When the wood-frame building is completed next year, it will be used by staff and volunteers from the Buffalo Maritime Center to construct a replica of the 1825 packet boat, which transported Governor DeWitt Clinton from Buffalo to New York City to mark the official opening of the Erie Canal. See renderings of the Longshed here.

"I was so confident that the Buffalo Heritage Carousel project was the ideal family-friendly addition to Canalside attractions that I fought for and secured $500,000 in state funding to support the project. Today's groundbreaking is an exciting next step towards the completion of a project that will add great value on our waterfront for generations to come," Senator Chris Jacobs said Friday.

Assemblyman Sean Ryan added, "As the carousel nears completion it's become clear that this project has exceeded even our highest expectations. The beautiful restoration work that has been done on this historic carousel will draw visitors from all over to Canalside for years to come. I'm proud to have joined Governor Cuomo and Buffalo Heritage Carousel Inc, as a leader on this project and I thank the community for the excitement they've shown during this process. The groundbreaking brings us one step closer to the completion of this beautiful carousel, and I can't wait to see people's reaction when they're able to take their first ride on the finished product."

City of Buffalo Mayor Byron Brown said Friday, "This is another truly exciting day for Canalside, the City of Buffalo, and the Western New York Region. When this historic carousel debuts next summer, it will attract children of all ages who will enjoy riding it, as well as carousel buffs from around the world who will come to Buffalo to see it. My Administration and the Buffalo Common Council were pleased to transfer this parcel at the intersection of Perry and Prime streets to Erie Canal Harbor Development Corporation for $1, to accommodate this $5.3 million project."

Erie County Executive Mark C. Poloncarz added, "This exciting project is just one component in a series of positive economic development advancements that are taking place at Canalside. Adding this historic carousel will help continue the growth along our waterfront and establish a landmark destination that will provide entertainment opportunities to residents of Erie County as well as visitors to our region."

Buffalo Heritage Carousel, Inc. was formed as a 501c3 non-profit organization to purchase, restore a vintage menagerie, park-style carousel which was manufactured in 1924 by Spillman Engineering in North Tonawanda and to house the carousel in a building at our revitalized urban waterfront at canalside.