Gulf Arabs Back Trump's Mideast Efforts, But Not Peace Plan 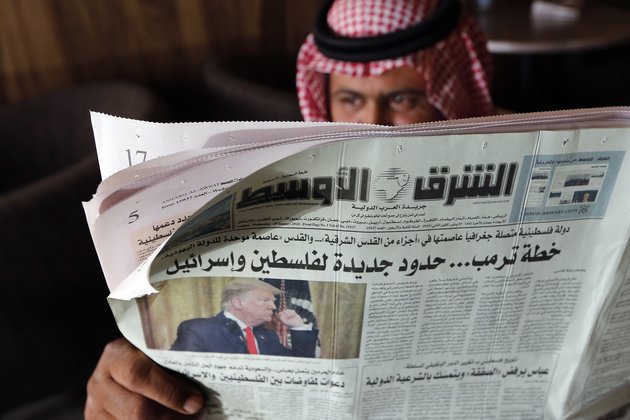 DUBAI, UNITED ARAB EMIRATES - A tectonic shift in relations quietly underway for years now was on full display as representatives of Gulf Arab states attended President Donald Trump's unveiling this week of an Israeli-Palestinian plan that heavily sides with Israel and all but crushes Palestinian aspirations.

The audience at the White House, when Trump presented the plan alongside Israeli Prime Minister Benjamin Netanyahu, included Christian Zionist leaders and staunch pro-Israel supporters, such as Republican party donor Sheldon Adelson. Rounding out the crowd were ambassadors of the United Arab Emirates, Bahrain and Oman, who posed for a photo at the White House ceremony for the plan, which Palestinians have outright rejected.

For the Arab perspective, however, Saudi Arabia's reaction was the one most closely watched. The kingdom expressed support for the Trump administration's efforts, but did not sends its ambassador to attend the ceremony.

The Saudi response was also significant for what it didn't say - the kingdom did not endorse the plan, but also made no explicit mention of long-held Arab demands for a Palestinian state on occupied land with east Jerusalem as its capital.

Rather, Saudi Arabia encouraged Palestinians to start "direct peace negotiations," essentially urging the Palestinians to accept the White House's framework as the starting point for talks.

"The Saudis crafted their message to appeal to two audiences: their domestic public and the Trump administration," Kristin Diwan Smith, a scholar at the Arab Gulf States Institute in Washington, said. Their formal statement, she said, does nothing to offend Trump or deter the Israelis.

With the exception of Kuwait, all Gulf Arab countries have engaged in outreach with Israel or pro-Israeli figures in recent years. The effort has accelerated as Saudi Arabia and Israel share a common threat in Iran.

Avi Berkowitz, a White House staffer intimately involved in drafting the plan, immediately thanked Saudi Arabia for its statement. In five separate tweets, he shared the Saudi response, as well as an article on the conservative Fox News network that carried the headline: "Saudi Arabia backs US-Israel efforts to achieve Mideast peace." That tweet was shared by Trump's daughter Ivanka Trump, whose husband Jared Kushner was the chief architect of the plan.

The optimistic spin on the Saudi response underscores how important the kingdom's support is to any future peace deal.

Less talked about, though, was a second Saudi statement published minutes after the first, announcing that King Salman had spoken with Palestinian President Mahmoud Abbas and affirmed Saudi Arabia's "steadfast stance on the Palestinian issue and the rights of the Palestinian people."

Palestinian officials said that during their call, Abbas explained to the 84-year-old monarch why the Palestinians reject the plan and emphasized the issue of Jerusalem. They said King Salman told Abbas that Saudi Arabia supports any decision the Palestinians make. They spoke on condition of anonymity because they were discussing a confidential diplomatic matter.

Relations between the Palestinian leadership and Trump fell out after he recognized Jerusalem as Israel's capital and moved the U.S. Embassy there. In a show of support for Palestinians that year, King Salman renamed the 2018 Arab League conference "The Jerusalem conference" and pledged $200 million in aid for Palestinians.

Still, Saudi Arabia appears to have shelved its own Arab Peace Initiative, drawn up in 2002, that offers Israel normal ties with Arab states in return for Palestinian statehood on territory captured in 1967 - a plan that now starkly contradicts the White House's blueprint.

The U.S. plan skews in favor of Israel and shunts many of the Palestinians' core demands by keeping some 750,000 Jewish settlers in place, recognizing Israel's sovereignty of the strategic Jordan Valley, and asserting Jerusalem as the "undivided capital" of Israel.

Saudi Arabia's position has shifted with the rise to power of the king's son, Prince Mohammed. Unlike his father's generation, the 34-year-old crown prince appears primarily concerned with thwarting Iran and not with defending the Palestinian cause.

Saudi Arabia, the UAE and Bahrain have sought close ties with Trump and have used interfaith efforts to build ties with his evangelical base and pro-Israeli Jews, chiefly to counter Iran's footprint in the region.

As Trump campaigns for re-election, he's counting on his base of Christian evangelicals, who hold support for Israel at the very core of their faith. Most believe the return of the Messiah can take place only after the Jewish Temple Mount is rebuilt on the site of the Al-Aqsa Mosque compound in east Jerusalem.

Bahrain last year hosted a White House workshop to shore up Gulf Arab financial incentives that could woo the Palestinians to back the plan. Oman, which has ties with Iran, hosted the Israeli prime minister in a surprise visit last year that served to remind Washington of its unique ability to be a conduit for talks.

The extent of Gulf Arab ties with Israel is still mostly kept private, though. Saudi Arabia and the UAE have allegedly used Israeli spyware to go after government critics.

In an interview with the Saudi-owned Al-Arabiya news channel this week, Kushner emphasized the threat of Iran as he tried to the sell the channel's pan-Arab audience on his plan.

"Israel could be the biggest ally to Saudi Arabia in terms of helping them have more advanced technology and defense and being safe," Kushner said.

Saudi Arabia this week rebuffed suggestions again it could normalize ties with Israel before Palestinians reach a settlement. That's in part because Saudi kings have long used their custodianship of Islam's holiest sites to vie for ideological supremacy over rivals Turkey and Iran. Each has historically competed to show their defense of Muslim claims to Jerusalem.

Responses to the White House plan fell along these political fault lines once again. Turkey's Foreign Minister Mevlut Cavusoglu warned that "Jerusalem is our red line" while his Iranian counterpart, Mohammed Javad Zarif, told Muslims "to wake up" and reject any notion of the U.S. as an honest broker.

A column in the Saudi Al-Riyadh newspaper said Turkey and Iran could try to use the moment to gain political and social advantage through slogans of resistance to Trump's plan in the name of Islam and Palestinian rights.

"The greatest danger to Palestinian interests now is to do nothing and continue waiting for a miracle," he wrote. 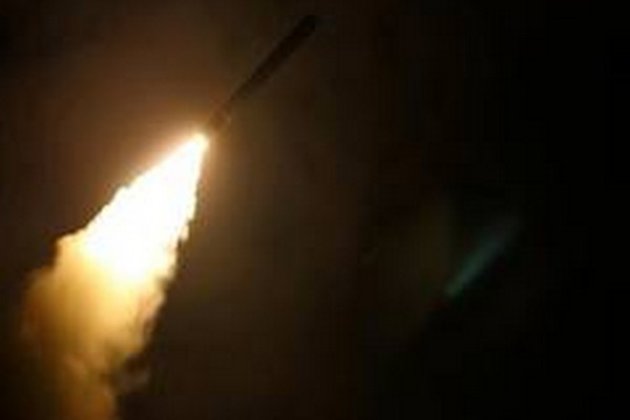 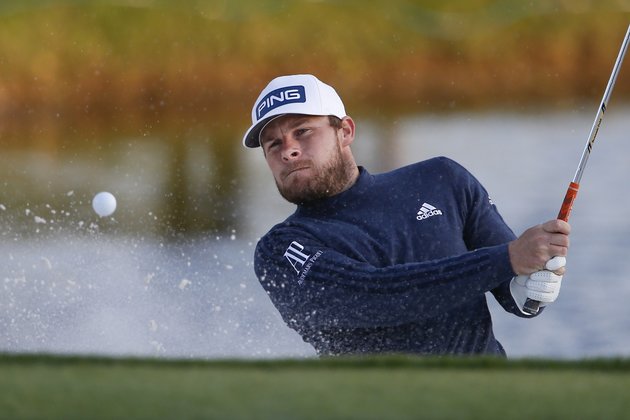 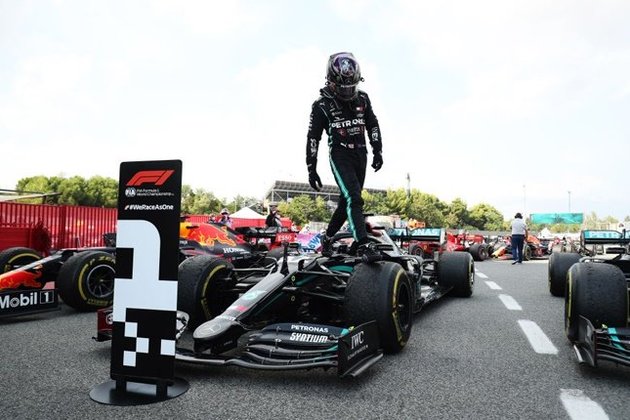 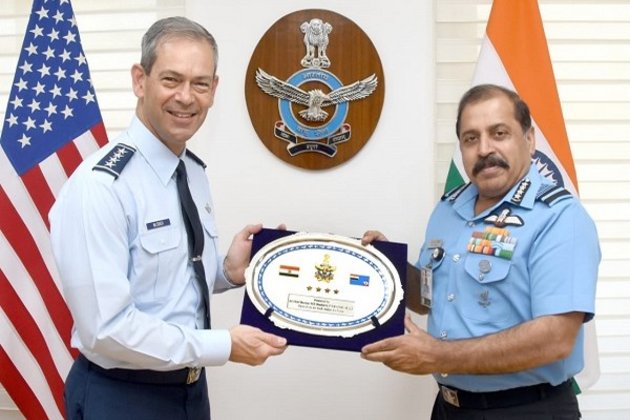 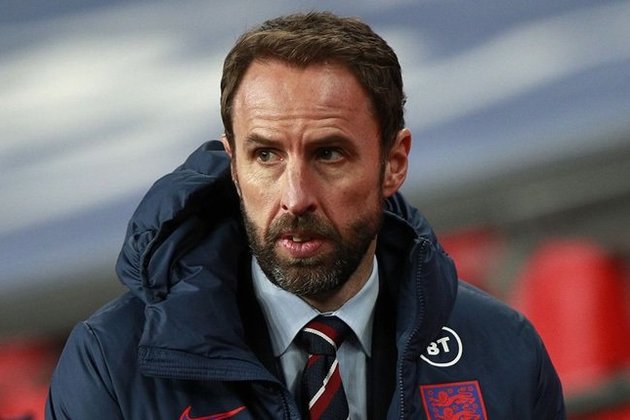