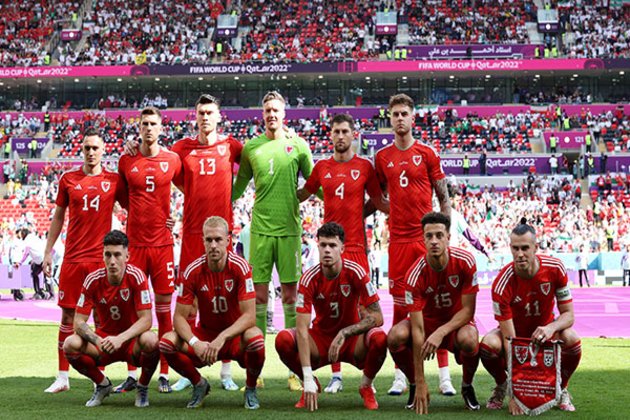 Al Rayyan [Qatar], November 26 (ANI): Wales coach Rob Page said that his team had fallen well below the standards they established for themselves as a loss to Iran put them on the edge of World Cup elimination.

Page said that Carlos Queiroz's team deserved their victory and refused to use Wayne Hennessey's red card, which was only the third for a goalkeeper in World Cup finals history, as a reason for the loss.

Before Iran ultimately gained the lead in the 98th minute on Roozbeh Cheshmi's long-range shot and Ramin Rezaeian's breakaway second, they struck both posts and had a goal overturned.

"This is a hard one to take. I've said to them before every game: 'Go and show the world what you show us every day,' and that is not a true reflection of that team," Skysports quoted Page as saying.

"They got their true rewards today, they deserved that defeat. We fell well below the standards that got us to the World Cup, if we'd met those standards we'd have been alright. And if you do that in top competitions, you get punished," he added.

Talking about the Three Lions' game, Page said, "We want to finish the competition on a high. It's out of our hands for going through, but we want to finish with a good performance and a win. We're low at the moment, but we'll get them back up tomorrow for a tough game to finish with."Coming to the match, substitute Roozbeh Cheshmi's goal in the 98th minute took the game from Wales as they scored a goal in injury time to take a crucial 1-0 lead.

Things were on level terms till Wales' goalkeeper Wayne Hennessey got a red card in the 86th minute. Iran took advantage of 10-man Wales and scored the decisive goal. The Asian side who suffered a heavy defeat in their previous match against England made it 2-0 as Ramin Rezaeian scored off a counter-attack to seal the victory.

Gareth Bale created history for Wales as he was playing in his 110th appearance for the country.

In the seventh minute, Mehdi Taremi's assist helped Iran's Sardar Azmoun take an attempt but his right-footed shot from outside the box was saved in the bottom left corner.

Five minutes later Wales' Connor Roberts came with a cross where Kieffer Moore played a right-footed shot from the centre of the box but it was saved in the centre of the goal. In the 15th minute, Sardar Azmoun tried a through ball, but Ali Gholizadeh was caught offside. Five minutes later Mehdi Taremi's yet another assist helped Ahmad Noorollahi from taking a shot but his right-footed shot from outside the box was blocked.

In the 23rd minute, Sardar Azmoun's header from the centre of the box went high and wide to the left. Six minutes later Kieffer Moore's header pass went to Gareth Bale where his left-footed shot from outside the box was saved in the bottom right corner.

Moore created yet another opportunity in the 42nd minute but Harry Wilson's left-footed shot from the left side of the box was blocked.

In the 44th minute, Ethan Ampadu tried a through ball but Bale was caught on the offside. In the stoppage time, Joe Rodon of Wales was shown a yellow card for committing a foul. In the dying moments of the first half, Iran pressed again but Mehdi Taremi's left-footed shot from the centre of the box missed to the right. In the very next minute, Ahmad Noorollahi's right-footed shot from outside the box was also saved in the centre of the goal. The first half resulted in a score of 0-0.

Playing their first World Cup in 64 years Wales have only one point in two matches as their previous match against the USA ended in a draw. They now face an uphill task as they will face their final group match on Tuesday against England.

With this win, Carlos Queiroz's Iran now have a real chance of qualifying for their first World Cup knockout stages. (ANI)