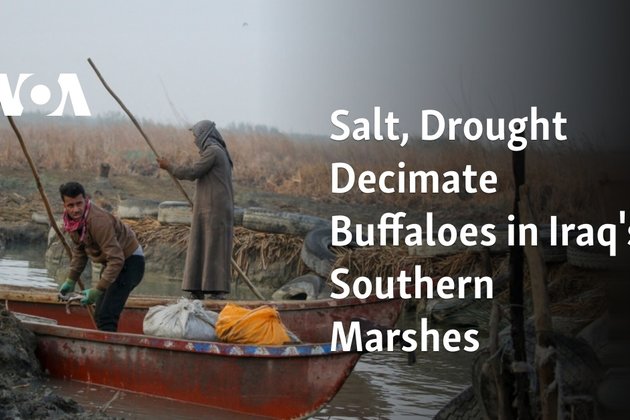 CHIBAYISH, Iraq - Abbas Hashem fixed his worried gaze on the horizon - the day was almost gone and still, there was no sign of the last of his water buffaloes. He knows that when his animals don't come back from roaming the marshes of this part of Iraq, they must be dead.

The dry earth is cracked beneath his feet and thick layers of salt coat shriveled reeds in the Chibayish wetlands amid this year's dire shortages in fresh water flows from the Tigris River.

Hashem already lost five buffaloes from his herd of 20 since May, weakened with hunger and poisoned by the salty water seeping into the low-lying marshes. Other buffalo herders in the area say their animals have died, too, or produce milk that's unfit to sell.

'This place used to be full of life,' he said. 'Now it's a desert, a graveyard.'

The wetlands - a lush remnant of the cradle of civilization and a sharp contrast to the desert that prevails elsewhere in the Middle East - were reborn after the 2003 fall of Saddam Hussein, when dams he had built to drain the area and root out Shiite rebels were dismantled. 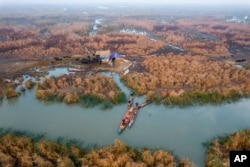 Boats enter a narrow water way in the Chibayish marshes of southern Iraq where farmers and buffalo herders have struggled with back-to-back drought in Dhi Qar, Iraq, Nov. 19 2022.

But today, drought that experts believe is spurred by climate change and invading salt, coupled with lack of political agreement between Iraq and Turkey, are endangering the marshes, which surround the Tigris and Euphrates rivers in southern Iraq.

This year, acute water shortages - the worst in 40 years, according to the Food and Agriculture Organization - have driven buffalo herders deeper into poverty and debt, forcing many to leave their homes and migrate to nearby cities to look for work. 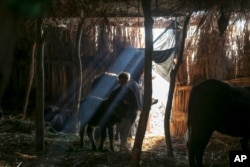 An Iraqi boy tends to water buffalos in the Chibayish marshes where animals have struggled and died due to high salinity amid water shortages in Dhi Qar, Iraq, Nov. 20, 2022.

The rural communities that rely on farming and herding have long been alienated from officials in Baghdad, perpetually engaged in political crises. And when the government this year introduced harsh water rationing policies, the people in the region only became more desperate. 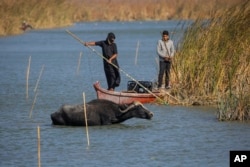 Oil-rich Iraq has not rebuilt the country's antiquated water supply and irrigation infrastructure and hopes for a water-sharing agreement for Tigris with upstream neighbor Turkey have dwindled, hampered by intransigence and often conflicting political allegiances in Iraq.

In the marshes, where rearing of water buffaloes has been the way of life for generations, the anger toward the government is palpable.

Hamza Noor found a patch where a trickle of fresh water flows. The 33-year-old sets out five times a day in his small boat across the marshes, filling up canisters with water and bringing it back for his animals.

Between Noor and his two brothers, the family lost 20 buffaloes since May, he said. But unlike other herders who left for the city, he is staying. 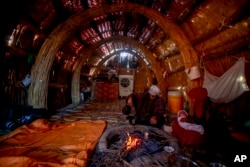 Razak Jabar makes tea inside his home in the marshes of Chibayish in Dhi Qar, Iraq, Nov. 20, 2022.

Ahmed Mutliq, feels the same way. The 30-year-old grew up in the marshes and says he's seen dry periods years before.

'But nothing compares to this year,' he said. He urged the authorities to release more water from upstream reservoirs, blaming provinces to the north and neighboring countries for 'taking water from us.'

'We feel embarrassed,' said Salah Farhad, the head of Dhi Qar province's agriculture directorate. 'Farmers ask us for more water, and we can't do anything.'

Iraq relies on the Tigris-Euphrates river basin for drinking water, irrigation and sanitation for its entire population of 40 million. Competing claims over the basin, which stretches from Turkey and cuts across Syria and Iran before reaching Iraq, have complicated Baghdad's ability to make a water plan.

Ankara and Baghdad have not been able to agree on a fixed amount of flow rate for the Tigris. Turkey is bound by a 1987 agreement to release 500 cubic meters per second toward Syria, which then divides the water with Iraq.

But Ankara has failed to meet its obligation in recent years due to declining water levels and rejects any future sharing agreements that forces it to release a fixed number.

Iraq's annual water plan prioritizes setting aside enough drinking water for the nation first, then supplying the agriculture sector and also discharging enough fresh water to the marshes to minimize salinity there. This year, the amounts were cut by half.

The salinity in the marshes has further spiked with water-stressed Iran diverting water from its Karkheh River, which also feeds into Iraq's marshes.

Iraq has made even less headway on sharing water resources with Iran.

'With Turkey, there is dialogue, but many delays,' said Hatem Hamid, who heads the Iraqi Water Ministry's key department responsible for formulating the water plan. 'With Iran, there is nothing.'

Two officials at the legal department in Iraq's Foreign Ministry, which deals with complaints against other countries, said attempts to engage with Iran over water-sharing were halted by higher-ups, including the office of then-Prime Minister Mustafa al-Kadhimi.

'They told us not to speak to Iran about it,' said one of the officials. The officials spoke on condition of anonymity to discuss legal issues.

Iraq's needs are so dire that several Western countries and aid organizations are trying to provide development assistance for Iraq to upgrade its aging water infrastructure and modernize ancient farming practices.

The U.S. Geological Survey has trained Iraqi officials in reading satellite imagery to 'strengthen Iraq's hand in negotiations with Turkey,' one U.S. diplomat said, also speaking anonymously because of the ongoing negotiations. 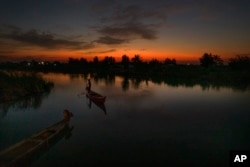 The sun sets as an Iraqi fishermen heads out on his boat in the Chibayish marshes of southern Iraq, in Dhi Qar, Iraq, Saturday, Nov. 19, 2022.

As the sun set over Chibayish, Hashem's water buffalo never returned - the sixth animal he lost.

'I have nothing without my buffaloes,' he said.